2022: A Landmark Year for Climate Action & What’s Next 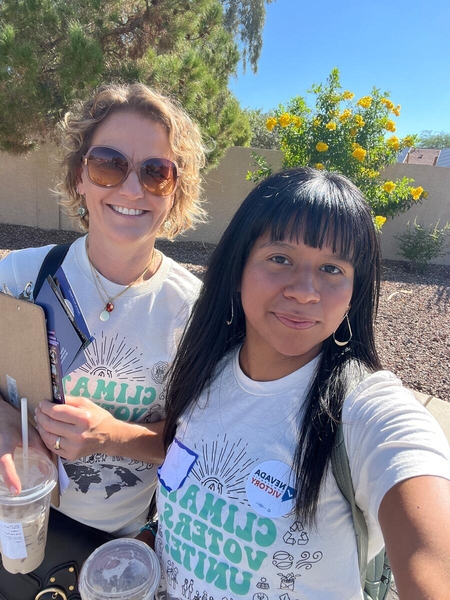 This was an exceptional year for climate action. President Biden and Congress passed landmark climate measures that make up the greatest investment in our clean energy future. As advocates, we have been calling on elected leaders to take bold, decisive action to confront climate change, and in 2022 lawmakers delivered. In a very big way.

It came not a moment too soon, with rising inflation and extreme weather disrupting people’s lives. 2022 was a year of climate-fueled tragedy and environmental injustices: failing infrastructure that left millions without safe drinking water; hurricanes, floods, heat waves, and droughts that threatened the health of millions of people and devastated entire communities, costing us over $15 billion in damages. Searing images and staggering statistics from Hurricane Ian’s path of destruction in Florida to the floods in Pakistan will be added to the climate crises’ growing list of billion-dollar disasters.

To stabilize the climate and ensure a healthy, thriving future for everyone, there is still much work to be done, especially to address the legacies of disinvestment and pollution burdens in low-income and communities of color. As we look forward into 2023, here are three major takeaways unleashed in the court of public opinion that underscore the historic progress we’ve made to advance climate action and the market momentum that positions us well for the work ahead:

Congress stepped up, finally!
As 2022 comes to a close, so too does a two-year Congressional session marked by a series of consequential bills passed the likes of which we haven’t seen since the New Deal: Record-setting investments in clean energy and climate solutions, in rebuilding and modernizing our aging infrastructure, in investing in US manufacturing, and in investing in long-neglected, underfunded and pollution-burdened communities. Rust belt states, red- blue- purple states, farmbelt to coastal, rural to urban: 2022 is a year of newfound economic opportunity in US manufacturing and good-paying jobs, all that will unleash our clean energy future while tackling the climate crisis head on.

In addition to the Bipartisan Infrastructure Law, the Inflation Reduction Act, the CHIPS bill, Congress also passed a federal budget bill in the waning days of December that make it possible for federal agencies to fully implement these new transformational bills. Almost all of these achievements were made possible because of bipartisan support.

Business responds: Investments in climate solutions surge
Clean energy-related investments are popping up everywhere! It’s hard for a week to pass without a major announcement from a clean energy or clean transportation manufacturer revealing new plans to expand. Here’s a sampling from the Fall: a new solar panel manufacturing plant in Alabama; batteries for EVs being manufactured in West Virginia; an EV charger manufacturer in South Carolina. Hundreds of new jobs are being created at each site. Millions of dollars are being added to local economies.

Meanwhile, for the first time, renewables are on track to surpass coal for electric generation in 2022, according to the U.S. Energy Information Agency. And this trend is occurring globally as well, with wind and solar energy generation on course to overtake coal and become the planet’s biggest source of electricity generation by the middle of this decade, projecting to account for nearly 40% of worldwide electricity in 2027.

This flurry of activity isn’t by chance. It is in large part due to federal leadership. The Inflation Reduction Act could become America’s most significant investment in clean manufacturing, leveraging tax dollars to generate roughly $1.7 trillion in new investment over the next decade. The impacts of these investments will last for decades and if implemented as intended, will ensure no community is left out of this clean energy transition. Think of the hundreds of electric-powered school buses and electric-powered postal trucks that will be arriving in communities across the country—delivering cleaner air to millions of school children, residents and bus drivers!

Voters turned up and out
Climate voters showed up twice in earnest in 2022. First, voters pushed lawmakers to include major climate investments in the Inflation Reduction Act, recognizing that we had a once-in-a-generation opportunity to lock in these transformational investments before the midterm elections. Lawmakers listened to their constituents; and two-thirds of voters supported the climate and clean energy investments that Congress passed into law.

Second, voters showed up and elected climate champions up–and-down the ballot. According to ABC News polling that was done leading up to and day-of the midterm elections, climate was a top issue for voters of all ages, not just young voters. More “climate voters,” people whose top issue is the climate crisis, showed up to cast ballots than in any other election in U.S. history.

And the youth vote turned out with climate top of mind. According to Tufts, 27% of voters ages 18 to 29 cast their ballots in the 2022 midterms, the second-highest youth turnout in the last three decades. “Young people inherit the greatest benefits of action, and the greatest consequences of inaction,” said Cristina Tzintzún Ramirez, president of NextGen America, which invested heavily in turning out the Gen Z vote. Combined, Gen Z and millennials will make up the largest voting bloc in 2024. Youth voters have the potential to grow in power and influence.

2023 and beyond
As we take stock of 2022, we know the work to stabilize our climate by drastically cutting global-warming pollutants must continue. We have critical momentum to create the societal tipping point needed to secure a clean energy and climate stable future.

Building on the progress made, 2023 is poised to be a year filled with more opportunities and action – from strong federal rules that would set limits for the largest sources of climate pollution like power plants and the transportation sector. And more economic opportunities unlocked through the implementation of the three new laws that are spurring investment in zero-emitting transportation, renewable electricity generation, and climate-resilient infrastructure.

2023 also will mark the beginning of the next presidential election season, and with that our work to deepen our bench of climate voters who demand bold leadership and climate progress and hold lawmakers accountable who fall short. We all have a role to play in advocating for equitable climate solutions, and it begins today by reminding the administration of the work ahead. Please join our community of activists working at all levels of government and industry sectors to win the benefits of climate action.