TUCSON, AZ – Save a few years in Michigan, Rocky Rivera, EDF Action’s organizer in Tucson, has lived in Arizona all his life.

I’m in town for EDF Action’s climate voter summit in Tucson one Saturday morning in September. It’s one of more than a half-dozen events EDF Action held in Arizona, Georgia, Michigan, Nevada, and New Hampshire in September to inform, excite, and engage EDF Action members ahead of this year’s midterm elections.

I meet Rocky at a suburban co-working office building. It’s a beautiful place. The complex is lined with tall palm trees whose bright green fronds seem to glow against the desert sky. Rocky had spent weeks putting together this event. He’d certainly picked a good spot.

I’d arrived a bit before the first volunteers showed up, and Rocky and I are getting to know each other: “I grew up in a nice town in the Southeastern corner of Arizona – Bisbee,” he tells me. It’s barely 10 AM and my weather app is rapidly approaching triple digits. “It’s up in the mountains, so we didn’t experience the same heat they do in Tucson or Phoenix.”

My midwestern mind is skeptical. Arizona is the stuff of legend where I grew up. In the winter, the Phoenix area is overrun with snowbirds. But come May, the retirees begin their annual migration back north and, in my imagination, Arizona is left like one of those old-timey Western ghost towns you see in the movies – tumbleweeds dusting through empty streets as the sound of the wind howls across the desert. Why any living soul would dare brave a summer here baffles me.

I really have to suspend my disbelief when he tells me his passion for environmental advocacy stems from a love of the outdoors instilled in him growing up in this seemingly eternal inferno. “I just had this desire to be outside, to go birdwatching, to see nature.” He tells me about a place not far from Tucson where a cold river flows. Really? I think to myself. It sounds too good to be true. The place is called Tanque Verde Falls, Rocky says. “It’s an actual waterfall system in the middle of the desert. It used to just flow and flow and flow. But since I moved back from Michigan, I’ve noticed how it’s begun to dry up. It just doesn’t flow as often as it did.” It’s a familiar story. Arizona is among the most vulnerable states in the country to the effects of climate change. One recent study suggests that up to six Arizona counties could become uninhabitable in the next 30 years.

The first EDF Action members to arrive at the summit are students at the University of Arizona. Neither have ever canvassed or worked with a political campaign before, but both agree the stakes are too high to sit on the sidelines this year. “I want to encourage voters to make good decisions about who they’re voting for and how that’ll impact the climate,” Lilith tells me.

As more people arrive, I feel the excitement growing. “I’m here because when it comes to climate, the policies made in Washington are going to directly affect us,” says Sarah, an EDF Action member who’s worked in Arizona politics for years. The sentiment is widely shared. With passage of the Inflation Reduction Act, the United States has made historic progress on climate. But these gains aren’t guaranteed. Everyone in the room understands the stakes. If we keep our pro-climate majority in these midterm elections, we can go even farther. But if not, all the hard work we’ve put in over the past two years might be rolled back.

By the end of our climate voter summit, every volunteer is fired up to elect climate champions. Not only are they ready to go out and vote, they collectively sign up for a whopping 36 canvassing shifts with candidates like Senator Mark Kelly! 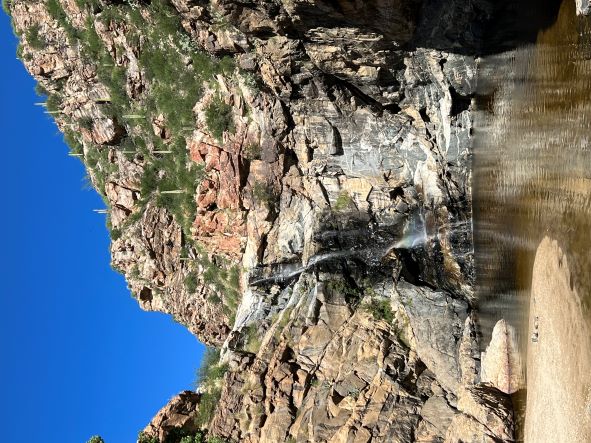 Once everyone files out, the snacks get put away, and the doors to the conference room are locked, I think back to the waterfall Rocky told me about. Feeling optimistic, I hop in my rental car and head up the canyon. A half hour later, I’m parked at the trailhead. The afternoon sun is out in full force, but the scenery is spectacular. Jagged hills littered with human-sized saguaro cacti unfold in front of me as I begin my hike. I walk down a hill toward the riverbed. At first, I hear nothing. No trickle of water, certainly no roaring waterfall. Then, as I turn the corner, I see it. Flowing through the seemingly empty desert runs a sparkling blue river, just as Rocky had described it. I hike a bit further and come across the falls. I take a swim. The air is oppressively hot, but the water is cold. It’s paradise.

My skepticism is gone. Like Rocky, I’ve completely fallen in love with this place. I’m more motivated than ever to protect it and the countless other natural wonders across the country threatened by climate change. With the help of volunteers like those who had come to our climate voters summit just hours before, we can not only keep but expand our pro-climate congressional majorities and pass legislation that puts people and our planet first.

As I begin the hike back to my car, I feel quite literally dizzy with excitement. Or maybe it’s just 105 degrees outside and I’ve run out of water.