What I learned while exploring Glacier National Park 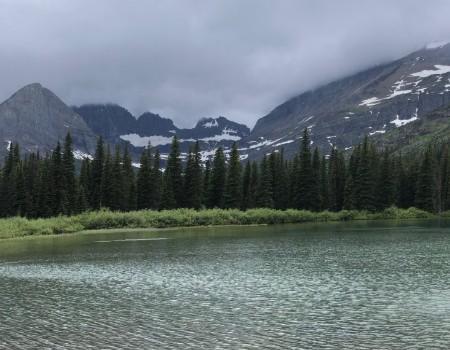 My family and I recently spent a week exploring Glacier National Park – a stunningly beautiful expanse of mountains, lakes and forests tucked into the north west corner of Montana. But you likely knew that already. It turns out, many Americans do, as it is one of the most visited national parks in a park system that welcomes more than 330 million visitors every year. I’ve heard the phrase: “our national parks are being loved to death” as trips to the parks are way up while taxpayer dollars for maintenance and upkeep are way down. But you likely knew that too.

Blissfully, cell phones don’t work in Glacier, so it set up to be one of those vacations where I could leave an out-of-office auto reply that read “I will be unreachable…” and be telling the truth. Work, unfortunately, found me, but not by text or email. I witnessed the Trump Administration’s edict to stop any discussion of climate change play out as my family and I traveled the park. I knew the Administration was trying every which way to keep Americans from hearing about climate change and its impacts but to watch it play out in real life was bizarre – and frustrating.

See, Glacier is a 1,583 square mile billboard of climate impacts. The most obvious is that the park used to have 126 glaciers and now is down to 25. The glaciers are projected to disappear entirely by 2030 if climate change trends continue. They used to be massive. Now you have to have someone in-the-know to point them out on the ridge line. Forest fires dot Glacier’s history, but are now far more common. Northwest Montana is warming at about twice the rate of the rest of the country, increasing the likelihood and severity of wildfires in Glacier and rapidly melting what’s left of the park’s glaciers.

Telling people that work in Glacier not to talk about climate change is farcical – but it was clear the suits in DC had tried. But I guess if you can stare down a grizzly, ignoring a political appointee isn’t really that difficult.

Now the seasonal employees that work for the private concessioners were a whole different story. The concessioners run the shops, food services, hotels and tours. Total wild guess – if you visit Glacier for a day or a week, you’ll take at least one tour, like a red “jammer” bus or short boat tour on one of Glaciers many lakes. And they’re great. But they really, really won’t talk about climate change.

You will learn a ton of really interesting sciency stuff on these tours like how glaciers formed the valleys, how glacial “flour” turns the lake water sparkly turquois and why Montana grizzlies are generally less aggressive than Alaska’s grizzlies – they primarily forage on bugs and berries unlike their northern cousins that hunt fish and bambi. But climate change impacts? Nope. The contortions that a smart person has to do to avoid talking about climate change while pointing at a disappearing glacier is painful to watch. Hat tip to our tour bus guide (from Florida of all places) for toeing the company line while getting quizzed by a nice family from Connecticut.

Glacier and the 60 other National Parks in our country are vacation destinations, sure, but more importantly they are captivating and inspiring classrooms. Each of them will change in some way because the planet is warming and we are doing precious little to stop it. The Trump Administration has done so many things to unravel environmental protections, communities across the country will feel these changes, some immediate and others over time. Glacier National Park might not have a single glacier left in 10 years. And that will be a surprise to far too many people that, like me, for a fleeting moment, got to enjoy a truly special slice of American wilderness.

In this critical election year, help defend our climate safeguards and create the environmental majority we need to drive bold climate action. Give a gift today.