Standing up for voting rights 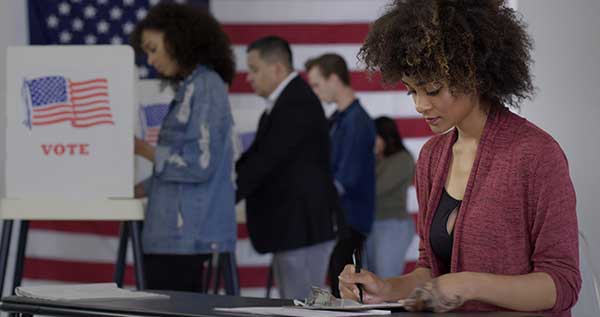 We have a long and troubling history of systemically denying ballot access to women and people of color. And right now is no exception.

In states like Florida, Arizona, Texas and many others, legislators are pushing extremely harmful provisions that will restrict access to the polls, such as restricting mail-in voting and banning drop boxes. While others, including Georgia and Iowa, have already enacted egregious provisions to limit voter access to the polls.

All of the tactics being pursued by states can hinder people's ability to cast a ballot, especially if they work two jobs or irregular hours, don’t have access to a car, or don’t have time or ability to wait in long lines.

Silence is not an option. We must speak up and take action against all proposals that limit access for Black, Latino and other voters to cast their ballots safely and freely.

The most impactful action we can take is to pass bold federal legislation to strengthen our democracy.

Without reforms it will be harder for people to use their collective voice and elect candidates, up-and-down the ticket, who will fight for pro-environment legislation, and put people above polluter-lobbyists and other special interests. We know that when every person’s vote is counted and every voice is heard, our country and our democracy is stronger – helping to make real and lasting environmental progress.

We are fighting back and pushing Congress to act now. The For the People Act and the John Lewis Voting Rights Advancement Act are critical bills that will help combat many of the efforts being pursued by states, from restrictions in registration to limits on mail-in voting to all-out bans on drop boxes.

The For the People Act, which has passed the House, would create a federal baseline to ensure voter access, modernizing our voter registration system by setting up same-day and automatic voter registration, strengthening mail-in voting options and instituting early voting guidelines nationwide.

Additionally, this bill tackles redistricting by requiring states to use independent re-districting commissions to draw maps free of partisan influence, lays out some long-overdue ethics reforms and works to curb the influence of money in politics.

The truth is we need these reforms and we need them now. Voters all across the country are worried about climate change and want our government to take action. But we can’t act without a thriving democracy, where people have a real say in who will represent them and the legislation they will champion. We need democracy reforms in order to make progress protecting our environment, safeguarding public health and combating climate change. We need not just a working democracy but a thriving one. That’s why we’re supporting crucial reforms to our system of governance.