As President Biden has said many times, the climate crisis is, “a blinking code red for our planet.” Now is our opportunity to act with a bold bill that will tackle this challenge head on, strengthen our economy and protect public health.

We have a historic opportunity to defeat the climate crisis and build a sustainable clean energy economy.

The president’s climate agenda includes both the environmental and clean energy investments within the Bipartisan Infrastructure Law and $550 billion in climate investments, which passed the House and had agreement in principle among every U.S. Senator within the Democratic caucus. Together, they would amount to the single largest investment made by any nation anywhere in the world to tackle climate change and transition to a clean energy future.

Here, at EDF and EDF Action, we are leading supporters of bold and ambitious climate and clean energy action, working closely with our partners on the Hill, within the Biden Administration and with organizations like Build Back Together, Climate Power and the League of Conservation Voters. So far, we’ve spent over $8.5 million on advertising in key states and in Washington, D.C., to help get bold climate and clean energy solutions across the finish line.

To pass transformative legislation, we are mobilizing Americans to urge lawmakers to prioritize climate action by producing media and connecting grassroots volunteers with on-the-ground organizers.

These next several weeks are absolutely critical and remain the best chance to advance President Biden’s legislative agenda on climate. We need President Biden and key members of Congress to hammer out a deal, and soon, because we know that climate action can’t wait.

We at EDF and EDF Action are doing everything we can to help set our country up for success with meaningful climate progress, including launching a new national TV ad last week, mobilizing our grassroots supporters across the country and using every available tool to urge Congress and the President to negotiate a bold and ambitious bill that can be signed into law this year.

This moment demands unwavering leadership. President Biden and the Senate have an opportunity to pass transformative legislation, including the $550 billion climate framework that will jumpstart U.S. manufacturing, boost energy security and bring us a safer future.

If Congress and the Biden Administration are able to come together, our communities, our economy and our planet will all reap the benefits. American workers will have access to new, good-paying jobs. American families will save money to power their cars and heat their homes; and we can begin to reverse the crippling costs of extreme weather events, which last year alone cost the U.S. economy over $145 billion. And we will break our dependence on foreign oil, allowing our country to truly be energy secure and not have to rely on the whims of foreign leaders while creating good-paying jobs from manufacturing to installation right here at home and protecting our planet in the process.

EDF and EDF Action stand ready to support our allies when this package is enacted, to celebrate the historic progress that is being made. EDF Action will also work to galvanize voters to support climate champions in November.

EDF and EDF Action have more than 3 million members and activists across the country. Since the 2020 election, EDF Action has been engaging our members in key states and districts to build support for President Biden’s climate agenda. That’s because lawmakers in red, purple and blue districts all need to hear from their constituents about the urgent need to pass bold climate legislation.

After working last year to mobilize support in key House districts for federal climate action, and ultimately, for House passage of the Build Back Better Act, EDF Action is back on the ground with climate organizers in four states: Arizona, Georgia, Michigan and Nevada. In April, our EDF Action members were out in force for the Earth Day 2022 rallies to call for renewed efforts to pass the bold climate and clean energy investments we need. 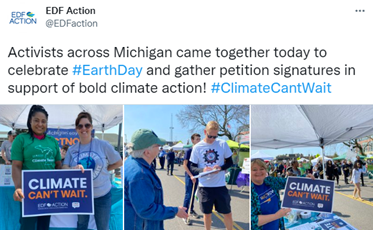 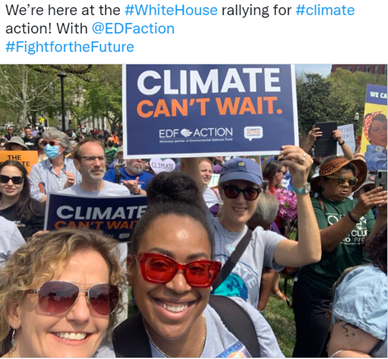 This grassroots organizing program is one of our strengths. EDF and EDF Action members have sent over 200,000 messages to Congress demanding bold climate and environmental action. This work began last summer in key states, including Arizona, Florida, Michigan, Nevada, North Carolina and Pennsylvania.

EDF Action organizers and volunteers were busy, too. During the August 2021 recess alone, they held events in eight states, including one with Senator Bennet and Congresswoman Lee to showcase the importance of investing in climate, clean energy and electric vehicles. The organizers also activated our EDF Action members to sign petitions, participated in over 70 visibility events and took to social media to advocate for bold climate action.

In 2021, EDF devised a comprehensive and strategic advertising campaign to urge Congress to “Go Bold” on climate and clean energy investments. The ads showcased how climate, clean energy and electric vehicles can help rebuild our economy while protecting our health and environment.

Then EDF Action launched TV and digital ads in 17 key House districts focused on the jobs investing in clean energy can and will create while also tackling the climate crisis. EDF Action followed this with a testimonial ad featuring an Arizona solar business owner. In September, EDF Action launched Texas specific ads.

As Republicans and big oil tried to spread misinformation about these bills, EDF Action responded to the moment by running new ads highlighting how investing in clean energy will lower energy costs, by helping households save up to $500 a year on electric bills.

As the House of Representatives prepared to take up the Bipartisan Infrastructure Bill, EDF Action launched a new series of ads in the House and Senate highlighting how investing in clean energy and tackling climate will create jobs, lower costs for families and are just common sense. In mid-October, EDF Action launched a series of new ads urging them to finish the job and pass the Build Back Better Act. In November, EDF Action ran ads thanking members for the newly passed infrastructure bill and extended the buys for the Texas ads.

To support and inform our paid media strategy, EDF Action conducted polling in September finding that a majority of Americans support investing in climate change solutions, including funding for incentivizing power plants to use clean energy, creating jobs in the clean energy sector, boosting clean energy manufacturing and expanding development and production of clean vehicles.

EDF and EDF Action also launched ads aimed at the Senate, recognizing the narrow margin any climate legislation will have in that chamber. EDF ran ads specifically targeting Senators Joe Manchin and Kyrsten Sinema, recognizing the critical role these members play. In Arizona, the campaign launched in both English and Spanish. EDF Action also launched ads in  Colorado, Nevada, Georgia and West Virginia, along with a billboard campaign in Arizona, Colorado,  Georgia  and Texas showcasing clean energy jobs. In West Virginia, Virginia, New Hampshire, Georgia and Arizona EDF Action ran ads focusing on the jobs throughout the existing supply chain for zero-emissions electric trucks and buses. 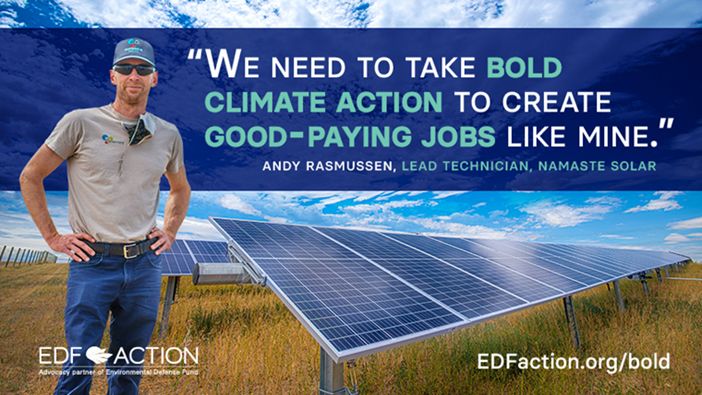 In December, as the Senate prepared to vote, EDF and EDF Action launched banner ads in Arizona, Colorado, Georgia, Nevada, Virginia and West Virginia highlighting Rocky Mountain Institute data projections on how much each state can save consumers on utility bills.

EDF and EDF Action also launched digital and TV ads in Arizona, Georgia, Nevada, New Hampshire, Virginia and West Virginia and a testimonial ad featuring a firefighter in Montana, focusing on urging senators to finish the job and pass the bold climate policies, to create jobs, save consumers money and invest in clean energy.

Then in January 2022, EDF Action launched two national TV ad campaigns around President Biden’s call on Congress to pass his bold climate agenda. “History Calls” highlighted the opportunity we have to tackle climate change and create good-paying jobs in the U.S. while “No More Time” showcased the urgent need to act now and transition to a clean energy economy.

In March 2022, EDF Action ran another six-figure ad campaign that included a print ad in the Wilmington News Journal and a 15-second digital ad to amplify President Biden’s State of the Union call for Congress to pass major investments in clean energy and environmental justice.