Kayaking for Climate Action in Michigan

“It’s essential everyone in the community realizes that climate action isn’t something we can leave to the next generation” said Kevin Fisher, a volunteer for EDF Action Michigan, as a group of climate activists shuffled into a pavilion on Belle Isle, a narrow strip of land nestled in the Detroit River between Michigan and Canada. These activists came together on a Friday afternoon to advocate for bold climate action, and Kevin led the event.

Kevin works as an event organizer in the Detroit area, but he finds his passion a few hundred miles north – among the conifers of Michigan’s Upper Peninsula. Unlike some Michiganders, he didn’t grow up an outdoor enthusiast. It was only a few years ago that he first found himself longing to spend more time in nature. It was a bittersweet transformation: “I realized that this amazing thing I was falling in love with is in real peril.”

He decided to do something to save his newfound passion: he joined EDF Action over two years ago! This summer, he teamed up with our lead organizer in Michigan, Tina Catron, to put together a rally to send his community a simple message: climate can’t wait. As EDF Action members, volunteers, coalition partners, and local residents arrived, they signed a petition calling on Congress and the Biden Administration to take bold action on climate now. And, in typical Motor City fashion, a bit of fun was had with food and drinks served out of the “frunk” of a blue all-electric Ford Mustang Mach E. 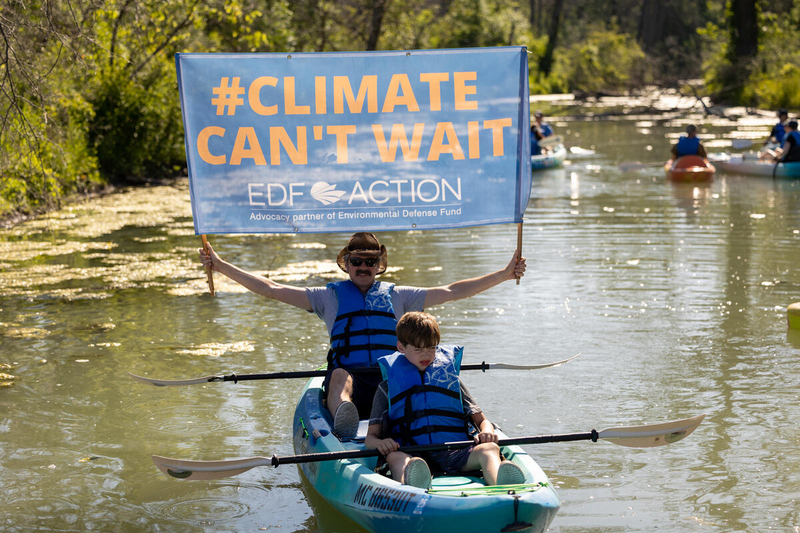 As a professional event organizer, Kevin offers EDF Action a wealth of experience. He finds that too many social issue events end up being, frankly, a bit dull. Rather than inspiring action, they can breed apathy. So, Kevin and Tina put their heads together and came up with a brilliant way to offer some fun – they’d invite people to kayak. The idea was a success. By offering an exciting activity, Kevin and Tina were able to draw new folks into the movement. Some came just for kayaking, but by the end of the day they were excited to engage in climate advocacy.

The event was kicked off by an inspiring group of speakers, who talked about what’s at stake if we don’t hit our carbon emissions reduction targets, what we need to do to get on track, and offer ways for ordinary citizens to get involved.

Chris Edwards, an Emmy-winning former TV meteorologist in Detroit, stressed the importance of having conversations about climate change with friends, family, and neighbors: “The single most important thing people can do to address the climate crisis is to talk about it. That’s exactly what I’m doing today, and at any opportunity I have with anyone, anywhere - I talk about climate change. It’s not all we should do, but it’s a great place to start.”

State Senator Adam Hollier, who represents the Detroit-based Second District, told the crowd why it’s critical that people get out and vote for climate champions: “we have to be all hands on deck” to win the bold investments we need for a clean energy future. “Climate change is affecting both the country and the planet, and we are seeing the consequences all over the world. I advocate for strong policies to combat climate change, reduce pollution, and invest in renewable energy. It is critical that we stand up and do everything we can to fight for smart climate policies. Now is the time to enact bold climate solutions and take the steps required to build the clean energy future that we all deserve.”

Michiganders have seen the impact of electing leaders who put the needs of people, our communities, and our shared home, above polluters. Until recently, the Detroit River was so polluted by industrial waste that scientists considered it uninhabitable for aquatic life. Local environmental groups – including Friends of the Detroit River – began to push for cleaning up the river in the 60s, but opposition to the cost of the operation brought work to a standstill. It wasn’t until 2001, with the creation of the Detroit River International Wildlife Refuge, that real progress was made to make the river livable for wildlife once again. In the two decades since, the US and Canada have come together to dredge pollutants out of the waterway. The results are remarkable: the return of native fish species has allowed birds of prey – including bald eagles – to make their home on the river. It’s a reminder that environmental activism works – but, as Senator Hollier said, we need all hands on deck to create healthier, greener communities for everyone.

Once the speakers wrapped up their presentations, participants signed “Climate Can’t Wait” petitions to lawmakers and then took kayaks out on the beautiful canals around Belle Isle. Our ’kayak-tivists’ spent the rest of the afternoon enjoying the fresh air, calm water, and sunshine while making a positive difference for the Detroit River by picking up trash as they paddled along. By the end of the event, the group had collected two full bins of litter!

The impact our volunteers made in one afternoon was hard to miss; as kayakers made their way back to shore, they remarked on how their effort had already improved the look and feel of the canals. One young man – Raith – excitedly proclaimed that the paddle was “the coolest thing I’ve ever done! I can’t wait to go back into the canals and do a Kayak/trash clean-up day again.”

If you’d like to become a climate advocate, please visit edfaction.org/actnow and send a message to your elected officials telling them to act now.