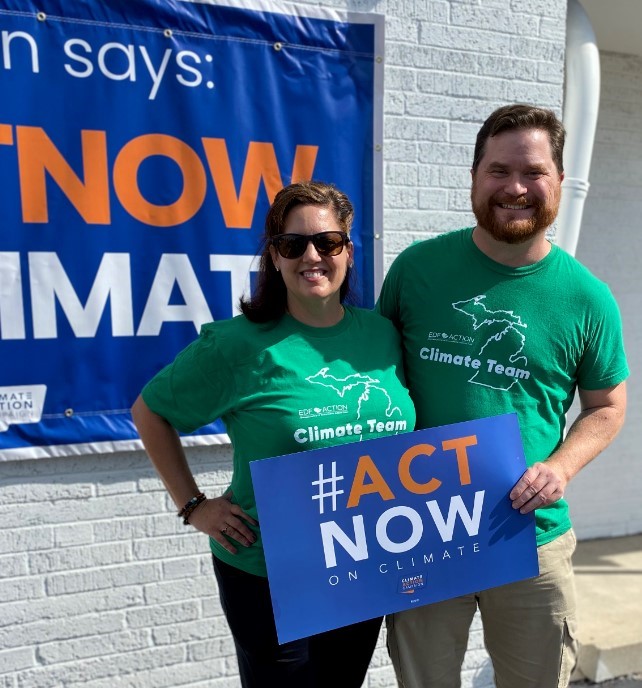 EDF Action’s Michigan organizer, Tina Catron, is an organizer at heart. “I love helping empower people to make their voices heard,” Tina says, “it’s exciting to talk to people about what matters to them and why they want to do climate work… we give them the tools and the confidence to stand up for what they believe in and be activists.” Tina takes a people-centered, mission-driven, and innovative approach to advocacy and grassroots organizing; she helps volunteers become movement leaders and facilitates creative opportunities for engagement including potlucks, rallies, congressional office drop-bys, and virtual constituent meetings with Members of Congress.

Tina’s passion for climate advocacy and environmental action began when she was just 12-years-old. In middle school, Tina created the first paper recycling program at her school; “I recruited my friends, I organized events, I talked to leadership… I was an organizer back then.” When given the opportunity to organize with EDF Action, Tina was eager to unite her passions for political engagement, organizing, and environmentalism. As she puts it, “This has always been an issue that is near and dear to my heart… getting to fight for environmental issues and engage with elected officials makes this the perfect job for me. I feel so fortunate.”

For two years, Tina has been building political power and developing volunteer infrastructure in Michigan. One volunteer leader, Kevin Fisher, joined the EDF Action Michigan team in February after attending a volunteer meet-and-greet event at a local nature center. “EDF Action is solutions-oriented, impactful, and  professional,” says Kevin, “that’s why I continue to do this work… I feel like my work matters, and I’m volunteering with an organization that will really get stuff done.”

Kevin brings to his volunteer leadership role years of experience in event management, marketing, and communications. He has helped Tina plan over a dozen events including an electric vehicle showcase in Detroit and a virtual speaker series. 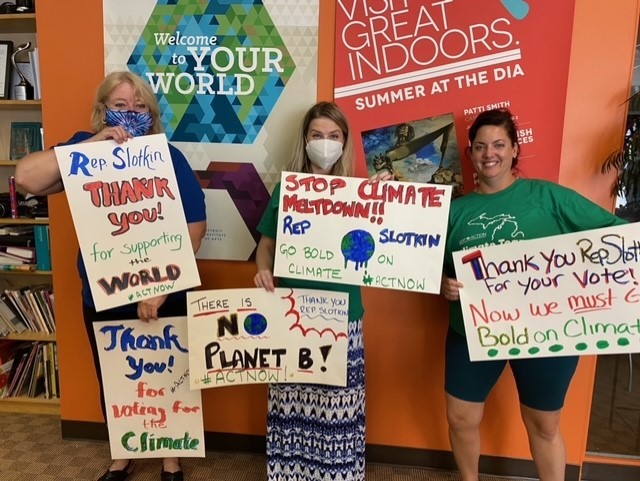 Another volunteer leader, Deb Simkowski, met Tina at a conference in East Lansing nearly 2 years ago. As Tina says, “Deb was instantly so excited and eager to get involved in the campaign when I met her, she’s a natural activist… She loves writing postcards and talking to people about climate issues.” Deb credits Tina for helping her become a leader; “Tina is inspiring, she’s organized, she gives feedback, and she cares about the issues she’s working on.”

Deb is a retired educator and clinical chemist who moved to Michigan in 2015. As an EDF Action volunteer leader, Deb writes postcards to her Members of Congress, writes letters to her local newspaper and attends events to talk to people about the environmental issues she cares about. She’s passionate about taking action as she’s seen the detrimental effects of the climate crisis; “I want people to realize that this is an imminent threat. The climate crisis is here… what we pay now is nothing in comparison to what we’ll pay in the future if we do not act.”

We’re running a series of posts on EDF Action’s grassroots work and the organizers leading the charge in key states and congressional districts! Check back on Wednesday for our next installment in this series. To learn more about how to take action in Michigan, contact Tina at tcatron@edfaction.org and join our Michigan EDF Action Facebook group!