A report from on the ground: How we worked to elect pro-environment Senators in Georgia 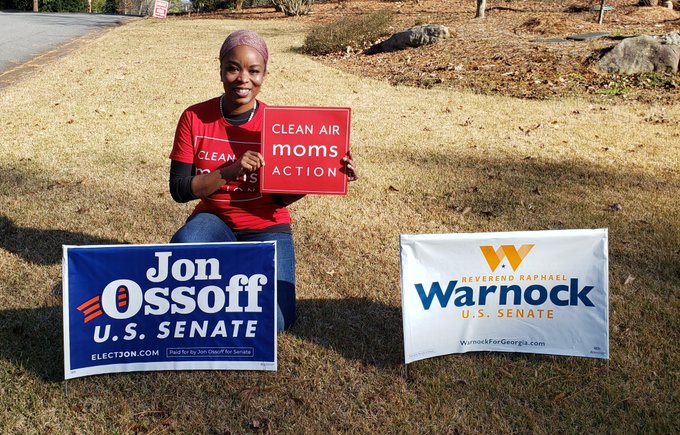 Our democracy thrives when everyone participates – using their voice and their vote to decide the future of our country. And on January 5th Georgians were out in full force to participate in our democracy and to make history by electing two pro-environment senators, Jon Ossoff and Raphael Warnock.

During the runoffs in Georgia, EDF Action PAC donated to the Warnock and Ossoff campaigns and mobilized our members to volunteer in these critical races. EDF Action PAC also lent people power to the efforts by supporting Fair Fight's groundbreaking get-out-the-vote programs – paying for Georgia-based Clean Air Moms Action field manager Tonya Calhoun to work directly with the Fair Fight team on their volunteer programs in the final weeks of the campaign.

Tonya did an amazing job, working to run 14 Fair Fight text and phone banks, participating in rallies, and energizing those in line to vote on Election Day. "I felt it in my spirit that we were going to win," said Tonya.

For Tonya, these elections in November and the runoffs were different because of the good organizing work that Fair Fight and Stacey Abrams have been doing over the years. "I've personally experienced Stacey lead as my SGA President while at Spelman College, and I've watched how hard she has fought for Georgia families throughout the years. She has always desired that Georgia residents use their voice to enact change," said Tonya. When EDF Action asked Tonya to get involved in these runoff races, she knew partnering with Fair Fight was the best way to make a lasting impact.

Tonya firmly believed that if enough people turned out to vote, Georgia could be a competitive state where they elect statewide winners who care about the environment and climate change. And with her work at Fair Fight, and Stacey Abrams' impeccable leadership to educate and empower voters across the state, it happened.

While working with Fair Fight, Tonya noticed that volunteers from all over the country and the world were showing up virtually to help contact voters with the voting information they needed to make a plan to vote that worked for them and addressed their coronavirus concerns. The focus was always on having real conversations with voters about their voting plans, whether they were choosing to vote by mail, vote early in person, or vote on Election Day.

There were so many heartfelt moments that Tonya and her team had with voters. One of the volunteers Tonya worked with had a conversation with an elderly lady who didn't know about the runoff elections, which allowed the volunteer talk her through where and how to cast her ballot. Another volunteer told the story about a family of six who all received Fair Fight text messages, which led to them coordinate with each other about making a plan to go to the polls as a family.

Georgia’s special election is TOMORROW. And it’s NOT too late to make calls and texts to join our own Tonya Calhoun to get out the vote! https://t.co/H9ZmxNbcoN #GASEN #GOTV #VoteLikeAMom pic.twitter.com/V0qaJWRdq8

Tonya mentioned that there was a lot of concern from the Georgians she talked to about the pandemic and how to vote safely. Her team was always there to ease these concerns, making sure voters knew when the last day was to request a vote-by-mail ballot, how to turn that ballot in, and even how family members could assist their loved ones who were sick or in the hospital request their ballot. Especially in a pandemic, Tonya found that the technology we have been utilizing was able to break down barriers and reach voters all across the state.

The day the Georgia victories were announced, a mob enticed by President Trump descended on the U.S. Capitol to try to stop the certification of the November presidential election, which by all accounts was conducted freely and fairly. This showed the fragility of our democracy and reinforced the importance of EDF Action's work to educate and mobilize voters.

Overall, EDF Action was extremely proud of the work Tonya did with Fair Fight, and the opportunity to play a role in helping to elect Jon Ossoff and Raphael Warnock to the U.S. Senate.