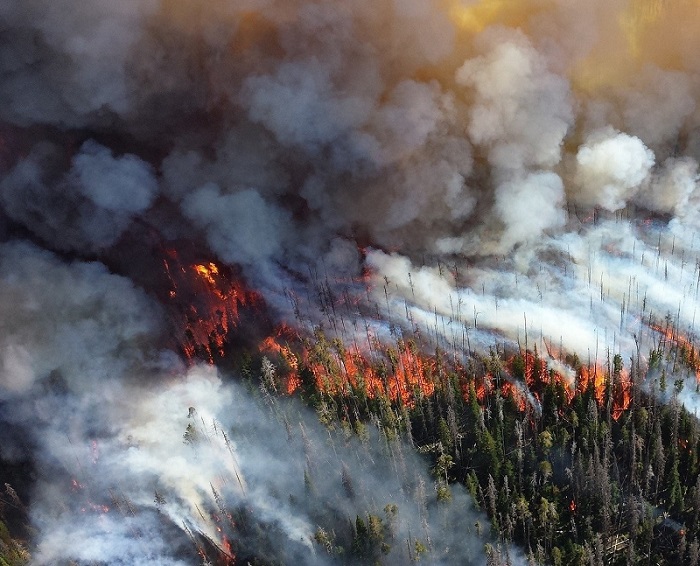 In September, Seattle topped an unexpected list. It had the worst air quality of any major city in the world, as wildfires across the West Coast produced ‘very unhealthy’ air quality from smoke.This year’s record-breaking wildfires sent a grim warning to the people of Washington state: the severe threats from climate change – including the intensifying and more frequent wildfires that have forced evacuations, destroyed homes and covered the West Coast with smoke – are already here.

In addition to worsening wildfires, climate change is also expected to increase temperatures and water stress, as well as make extreme weather events such as floods more common. And while every resident of Washington will experience the impacts of climate change, those impacts will not be evenly distributed: communities of color, indigenous communities and communities with lower incomes tend to face the greatest climate risks.

Legislators commit to state climate goals – but now what?

Thankfully, Washington state’s legislators recognized that strong action is crucial for curbing the worst impacts of climate change, and they set ambitious targets to reduce climate pollution during the 2020 legislative session. These targets require economy-wide greenhouse gas emissions to fall to 45% below 1990 levels by 2030, and 95% below 1990 levels by 2050.Science-based emissions reduction goals provide an important foundation for defining Washington’s climate future. Now, we need concrete policies that can make it a reality. These policies should drive emissions reductions across the economy, guaranteeing that the state reduces pollution consistent with these reduction targets, and support the investments needed to enable transformation of our energy systems.

Washington has already taken one key step to reduce carbon pollution by enacting the Clean Energy Transformation Act in 2019, which commits the state to an electricity supply free of greenhouse gas emissions by 2045. But we need a policy framework that encourages the state to move faster, secure deeper reductions and incentivize early action to slash power sector emissions. Electricity accounts for approximately 17% of the state’s climate pollution, and early action in this sector is an essential part of building a clean economy in Washington.

But a net zero power sector alone, even on a faster timeline, will not be enough for Washington to meet its climate goals. Washington’s legislators must build on their previous efforts and enact policies that guarantee emission reductions in all sectors including industry and transportation. This policy framework must also support investment in a clean economy, especially in the transportation sector, which is the largest contributor of greenhouse gas emissions in the state. This is a major missing piece in Washington’s climate plan.

Importantly, cleaning up Washington’s transportation sector consistent with hitting economy-wide reduction goals would not only be a win for climate action. It can reduce both greenhouse gas emissions and unhealthy air pollution, as well as benefit the state’s economy.

Cleaning the air: Gasoline, diesel and other oil-based fuels emit particle pollution that causes asthma, lung disease and other respiratory illnesses. This health burden falls disproportionately on people of color and lower income communities, who tend to make up a higher percentage of the population that lives near heavily trafficked roadways. Infants and children are also particularly at risk. Washington needs policy that will that tackle transportation emissions head on, and encourage investment in sustainable transportation and transit, all while building equitable public health outcomes.

Boosting a clean economy: Limiting transportation pollution will incentivize electric vehicles and cleaner fuels to become more cost-competitive, encourage more clean industries to take root in the state and save consumers money. Electricity is on average six to seven times less expensive than gasoline and diesel, meaning Washington consumers with electric vehicles will save money over time and be less reliant on volatile out-of-state oil. Furthermore, Washington can expand its more than 2,000 jobs in the electric vehicle industry and encourage more clean industries to settle in the state.

Following through with concrete policy that can get the job done

Last year, Governor Jay Inslee said, “We’ve got to build the rocket now, not just say we will get to the moon.” By setting ambitious goals for greenhouse gas emissions reductions, Washington State has laid out a clear pace and trajectory for reducing climate pollution and fighting climate change.

Now, state legislators must step up and “build the rocket” by enacting a policy framework that will guarantee emissions reductions in every sector of Washington’s economy, ensuring that the state meets its targets and actually protects Washington from the worst climate impacts to come.

Tell your state senator it’s time to follow through on these climate promises and reduce emissions across the economy – including from transportation– before it’s too late.