Pence has a Dangerous History of Climate Denial 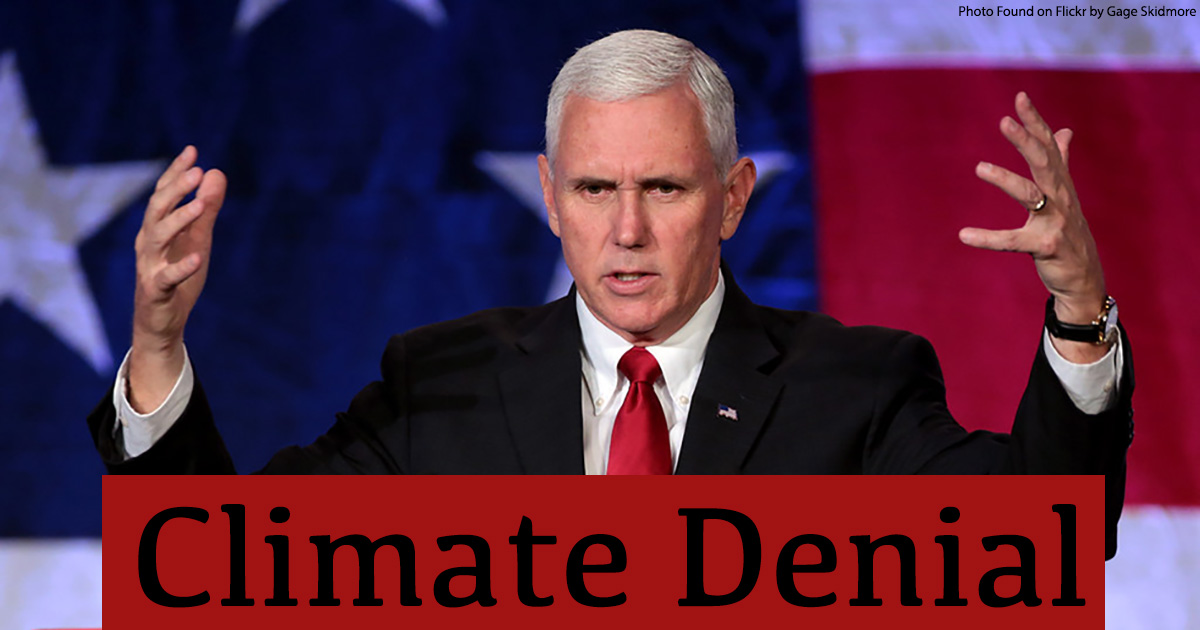 Since 2001, Vice President Mike Pence has been consistent in his denial of climate science and his opposition to commonsense climate solutions. You can’t trust him on much, but you can rely on him to oppose any efforts to make meaningful progress on climate.

In 2001, he called climate change was a “myth”, and then in 2008, he publicly denied the scientific consensus that the climate crisis is caused by human activity. He even claimed that there was “growing skepticism in the scientific community about global warming” in 2009. Even with the evidence right in front of him – storms increasing in severity and ravaging our coasts, floods devastating our farmlands, and wildfires burning across the West at an unprecedented scale –Pence still refuses to say whether climate change is a threat to the United States.

Not only has Pence denied the existence of this crisis, he’s also stood in the way of attempts to combat it with commonsense solutions. In 2009, he led a House Republican effort to block a major climate solutions bill, and in 2015, he wrote a letter opposing the Clean Power Plan, claiming that Indiana will “reserve the right to use any legal means available to block the rule from being implemented.”

After 2016, he brought the same pro-polluter agenda to the White House. Making good on his promise to oppose the Clean Power Plan, the Trump administration replaced the plan with its own weaker regulations, removing limits on emissions and potentially causing thousands of new cases of respiratory problems and premature deaths. Pence has issued a full-throated endorsements on the Trump administration’s environmental rollbacks, calling the withdrawal from the Paris Climate Accord “refreshing.”

Pence’s climate rhetoric and record fit squarely with Trump’s own efforts to cast doubt on climate science, scientists and his efforts to gut critical environmental protections. Trump has repeatedly called climate change a “hoax” and has attempted to undercut the scientific community surrounding the impact humans have on the climate crisis. The administration has acted on these beliefs, attempting to roll back over 100   bedrock environmental protections that protect our air and water.

Trump and Pence have consistently undercut or denied the scientific findings about our changing climate and have sideline scientists in other areas, including COVID-19. The administration has tried to silence or undermine scientists and experts all in favor of industry lobbyists and corporate polluters, including placing them at the helm of the EPA and the Department of Interior. It has also moved to censoring scientists from mentioning climate change, blocking congressional testimony on the issue, weakening the scientific review process for energy projects, and proposing deep cuts to the budgets of agencies that are supposed to protect our  health, and the environment.Throughout his career, Mike Pence has denied climate change and vehemently opposed climate action at every turn. And we know, if the Trump-Pence ticket wins re-election and is in charge of our country for another four years, they will continue to pursue their pro-polluter agenda and put our air, water and health at risk.

Paid for by EDF Action, edfaction.org, and not authorized by any candidate or candidate’s committee.