How Climate Action Can Strengthen Our Economy After COVID-19 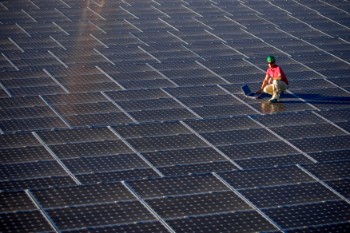 Right now, people are suffering and dying, losing their jobs and livelihoods, and are gripped by fear and anxiety. This is the unshakable reality under COVID-19 – and it offers crucial lessons for how we prepare for the long-term crisis of climate change.

The climate movement has long struggled to draw meaningful and lasting connections that align human needs and values with climate stabilization. Sometimes that it is a timing problem – climate change is not killing tens of thousands of people or casting millions into unemployment today, at least not directly. And precisely because it isn’t, the onus is on climate leaders and champions to meet people where they are and build a foundation of trust and credibility that leads to long-term progress and actually delivers the safe, climate-resilient world we so desperately need.

Americans, and certainly their elected leaders in Congress, may not be ready to push climate policy during a pandemic, but large numbers of Americans support meaningful climate action. People increasingly attribute the risks facing our farms, forests, coasts and cities to the looming climate crisis. The energy and ambition required to transform the U.S. into a 100 percent clean economy is very much alive and tangible. And, on the other side of COVID-19, we will need a hopeful, forward-looking vision of economic recovery and a rebirth that delivers prosperous, healthy communities.

Recovering the Economy, Stabilizing the Climate

While it still has a long way to go, climate action has gained traction in recent years in part due to its association with economic growth, job creation, public health, and clean air and water. These core goals and values are widely embraced across the American electorate and are key pillars of a winning climate agenda.

Americans have an increased sense of urgency about climate action, but they have a strong preference for plans that are realistic, achievable, and that steer clear of big, top-down government programs. The devastating economic impacts of COVID-19 have ushered in an unprecedented level of federal spending, and it would be a mistake to assume this appetite to invest in relief and recovery extends to tackling climate change.

Anti-climate voices have made strong in-roads with moderate and independent voters by instilling fear that massive government intervention on climate will cost a lot of money and jobs. They have used the Green New Deal as their latest punching bag – a tactic that is not new. The lesson is simple: a move to ambitious climate action in the future will not succeed unless those fears are addressed and assuaged.

What will move the needle is a shared understanding that climate action can create business and job opportunities in American communities, open new markets for American-made goods, save money on energy costs, build resilience to extreme weather impacts, and reduce health care expenditures. What’s more, America can end the billions of dollars of subsidies for fossil fuel companies and require them to pay a fee for the pollution they create, actions that carry an enormous economic upside. All of these outcomes, which carry demonstrable benefits to real people, will resonate more than ever in the midst of or just after the COVID-19 recession.

The current breakdown of our public health system will also likely factor heavily into future discussions about tackling and coping with climate change. Americans are less and less sympathetic to climate deniers, suspicious of large oil and coal companies and their influence on politics, and aware of the mounting human, physical and economic costs associated with extreme weather events. The strong warnings from respected authorities such as the Department of Defense and NASA helps make the case for a coordinated governmental response to climate change.

Ultimately, there is a vivid moral dimension to climate stabilization – the imperative of protecting the health, livelihoods and well-being of future generations. We are now seeing the devastation of a global disaster beset by poor planning, denial of facts and science, and the shifting of blame and responsibility away from the elected leaders sworn to protect us. The threat of and willful inaction to stem dangerous climate change carries an eerie resemblance, and the terrifying images and heartbreaking stories of fires, floods, hurricanes and heat waves are already leaving an indelible impression on our psyches.

As we emerge from the deep economic disaster we currently face, we must not just rebuild our economy, we must reinvent it, and point it squarely to a clean future. We must also rebuild our sense of community and common interest, bolster the partnership between government, the private sector, and local leaders, and create a new normal built around resilience, preparation and cooperation. Such an ethos will equip us to tackle climate change and any number of other pressing societal challenges.

In this critical election year, help defend our climate safeguards and create the environmental majority we need to drive bold climate action. Give a gift today.