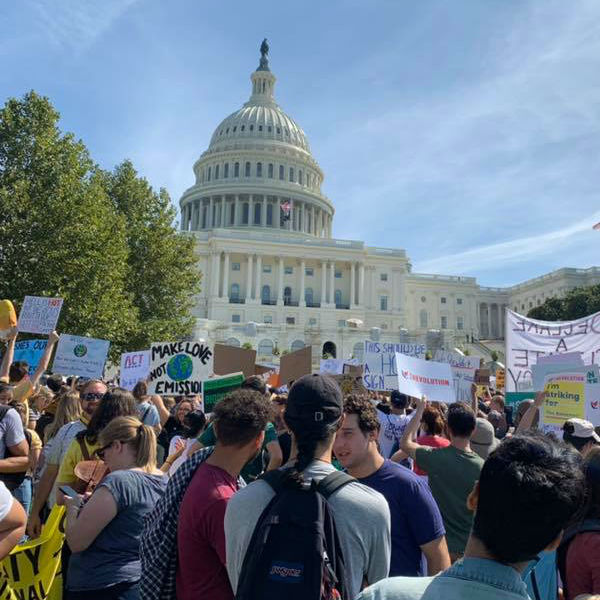 For the first time, climate change is, rightly, getting a national spotlight from presidential candidates. Why? Well, poll after poll shows it’s a top issue that voters care deeply about and are demanding bold climate action. That’s why candidates are talking about the climate crisis everywhere they go: putting out bold climate action plans, conducting interviews, and even launching advertisements on the issue.

But don’t take my word for it, you can see these ads and interviews for yourself — listen to how the challengers for the presidency are talking about climate change and how they’ll tackle the challenge head on.

First and foremost, presidential contenders are framing climate change with the seriousness it deserves and they are listening to the scientists. *Senator Michael Bennet has said “we must make no compromise on the science” in regards to climate change. Citing the Intergovernmental Panel on Climate Change, Senator Bernie Sanders has called for action to avoid irreparable harm and he goes on to remind us that young people will bear the brunt of climate change. The science is clear -  we still have time to combat this challenge, but we need ambitious solutions and we need to act fast. The cost of inaction is too high!

Senator Amy Klobuchar and Mayor Pete Buttigieg, both Midwesterners, have used the recent floods in Iowa to highlight the destruction extreme weather brings to the region and on our food supply. In Council Bluffs, Senator Klobuchar talked to a family who lost their home during the recent floods, a house that stood for over 100 years while Mayor Buttigieg took a tour of how the floods impacted Cedar Rapids and the cost to re-build comes with a $5 billion price tag.

*Andrew Yang put out an ad that not only highlighted the flooding in the Midwest but also drew attention to the other extreme weather events happening across our country.. Forest fires, hurricanes, and rising sea levels are all occurring more frequently and harming Americans livelihoods.

Tom Steyer joined his high school friends in their in Rye Harbor, New Hampshire to highlight how rising sea level has changed the coastline over the years. But this isn’t just happening in New Hampshire and isn’t confined to sea level rise, climate change is affecting communities across the country. Approximately six-in-ten Americans say climate change is affecting their community. People know more frequent wildfires and unusually long heatwaves aren’t flukes but instead indications of the climate changing around them. We need climate solutions to protect every American, no matter if they live in Representative Tulsi Gabbard’s home state of Hawaii, New Hampshire, or anywhere in between.

Solving this crisis will require us to implement smart policy solutions. These solutions are an opportunity for Americans to grow our economy, safeguard public health, and protect our planet all at the same time. To do this, we must transition our economy to 100% clean before 2050 — meaning making critical investments in clean energy, upgrading our infrastructure and expanding access to innovative technologies. Senator Elizabeth Warren and former Vice President Joe Biden both agree – we must make this transition to a 100 percent clean future and we must start now.

And taking climate seriously is not a one party affair: Republican presidential candidate Bill Weld is on the campaign trail talking about climate action, which includes putting a price on carbon pollution.

Candidates are also asking us to consider the progress we have already made and to imagine the possibilities of an all hands-on-deck approach. As *former Governor Deval Patrick knows well, investments in clean energy are already creating high-paying American jobs. Our investments in clean energy have resulted in solar energy prices plunging by nearly 90 percent and wind power becoming almost 70 percent cheaper in just a decade. The cost of lithium-ion batteries has dropped by almost 30 percent in just the last year. Former Mayor Michael Bloomberg led on clean energy in New York, resulting in cleaner air and reduced asthma attacks. It’s not just these candidates, but all the Democratic candidates are looking to double down on this progress, investing in more clean energy, protecting our health and safeguarding our planet for generations to come.

Clean energy isn’t the only policy that candidates agree on. They also want America to be a climate leader once again – calling for the U.S. to re-join the Paris Agreement.

The American people want a candidate who will be ready on day one to start enacting comprehensive climate solutions. And frankly, it’s clear that these candidates are listening – they’re all talking about the climate crisis and laying out their plans to combat it.

*The candidates with an asterisks next to their name have since dropped out of the presidential race.