This story of bipartisanship will make you believe in government again 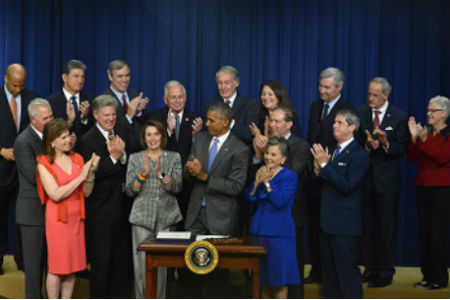 A professor of mine at the University of Michigan Law School once said that problems become more solvable when people lower their voices and work things out.

Few in Washington have been lowering their voice in recent years. As I noted in a recent Wall Street Journal op-ed, Congress rarely produces little more than partisan rancor, which made the recent passage of a historic chemical safety law so exceptional – and inspiring.

I’m referring to the Lautenberg Act, the most important environmental legislation in two decades, which the House and Senate passed overwhelmingly and President Obama signed into law last month.

In the midst of the final negotiations over that bill, I found myself on the phone with Sen. James Inhofe, the conservative Oklahoma Republican best known in my circles for throwing a snowball on the Senate floor to mock global warming. But we didn’t talk about any of that.

Instead we discussed our shared commitment to finding a way forward to reform an outdated law that failed to keep toxic chemicals out of homes, schools and workplaces.

That conversation helped me realize how right my teacher had been. Despite our profound and public disagreements over the years on climate change, we had found a way to work together and make progress.

It reminded us of old-fashioned legislating, where parties work toward common ground rather than jockey for partisan advantage. The subsequent victory showed that some of the oddest bedfellows in Washington can, in fact, deliver major reform.

Health and environmental advocates had spent more than two decades pushing for an overhaul of the Toxic Substances Control Act, our main chemical safety law that had remained unchanged since the era of bell-bottoms and disco. Despite the law’s obvious flaws, efforts at reform stalled.

In every Congress for the past decade, Democrats introduced strong legislation, bills that my organization supported. And each time they were blocked by those worried about overregulating the chemical industry.

Spurred by activists, states stepped in to fill the void left by the broken federal system that couldn’t even regulate a known danger like asbestos. This, in turn, created a patchwork of overlapping rules that manufacturers found confusing and onerous, adding more pressure on lawmakers from both parties to craft a national solution.

When Sen. Lautenberg died in 2013, Sen. Tom Udall, a New Mexico Democrat and long-time environmental advocate, stepped up to lead the effort to advance and improve the legislation.

Democratic Sens. Sheldon Whitehouse, Ed Markey, Jeff Merkley, Tom Carper and Cory Booker threw their support behind the bill after securing changes to strengthen the role of states, among other improvements. Sen. Barbara Boxer, after attaining concessions preserving additional authority for her home state of California and other states, eventually signed on as well.

Sen. Inhofe, who had recognized that a national regulatory program would bring greater certainty to the business community, led negotiations on the Republican side.

The House assembled its own set of unusual partners: Republicans John Shimkus and Fred Upton worked with Democrats such as Frank Pallone, Nancy Pelosi and Steny Hoyer.

Bipartisan negotiations ultimately  produced legislation that won near unanimous support in Congress – and, critically, a strong endorsement from the White House. It worked because we built a broad coalition demanding progress on this issue, and because lawmakers worked hard to navigate outside interests and pressures.

For too many in Washington, even talking to the opposition, much less working across the aisle, is a sin. In an era of narrow majorities and divided government, that is a recipe for certain failure.

It appears some are looking at the moral calculation in the wrong way. Because if a willingness to work with people you normally oppose leads to fewer hazardous chemicals in our children’s lives, we have all won.